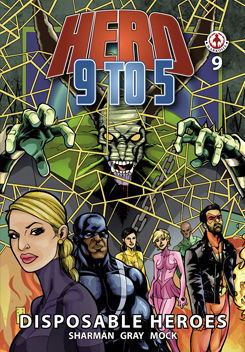 Out now from Markosia on ComiXology!

Return to a world where the rich can afford the best in super hero protection, but the poor have to get by with the heroic equivalent of third party, fire and theft

Fame! They build you up just to knock you down. When the down on their luck employees of Heroes 4 Zeroes find themselves the subject of a reality TV show they become the target of a group of religious fundamentalists who are decidedly more than meets the eye. How will they cope when a plot to overthrow the government leads to a world without heroes and brings out the wild side in one of their own? Conventions, Reality TV, Politics, Religion, The Monarchy…nothing is sacred this time!

# 9 – Disposable Heroes: Hero Management – It’s the nineteenth annual Super Heroics International Trade Expo and the employees of Heroes 4 Zeroes are bored. However, the League of Absolute Mega Evil are here to relieve their boredom with punching and biting! Meanwhile, outside, protesters rail against the hero worship going on inside, but who’s behind these protests and what is their nefarious plan?

Written by Ian Sharman and illustrated by David Gray and Patrik Mock, click the links below to download Hero 9 to 5 #9: Disposable Heroes on ComiXology now!

Editor In Chief, Markosia. View all posts by Ian Sharman