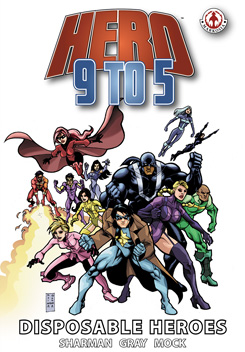 Returning once more to a world where being a super hero is just another nine to five job!

When Frostica flies into a jealous rage after Flame-O and Pink Girl are caught kissing on live TV, the government gives in to pressure from religious fundamentalists to ban super hero agencies.

All hell breaks loose as villains reign supreme across the UK.

Nobody is safe in this mad rampage, not the Houses of Parliament and not even the Queen herself!

“Ahead of its time, this existential masterpiece is the ultimate Brexit allegory, but more importantly it’s a side-splittingly glorious read.” – Annika Eade

Written by Ian Sharman and illustrated by David Gray with colours by Patrik Mock, Hero: 9 to5 – Disposable Heroes is available to pre-order now from the links below! 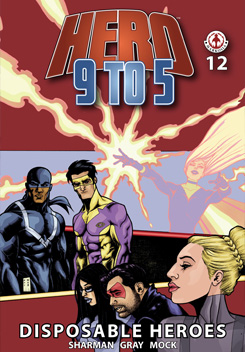 Return to a world where the rich can afford the best in super hero protection, but the poor have to get by with the heroic equivalent of third party, fire and theft

Fame! They build you up just to knock you down. When the down on their luck employees of Heroes 4 Zeroes find themselves the subject of a reality TV show they become the target of a group of religious fundamentalists who are decidedly more than meets the eye. How will they cope when a plot to overthrow the government leads to a world without heroes and brings out the wild side in one of their own? Conventions, Reality TV, Politics, Religion, The Monarchy…nothing is sacred this time!

#12 – Disposable Heroes: Holding Out For A Hero – Transformed into Insania, Mental Lady seeks to remake the UK in her own image…and she’ll start by abolishing the monarchy. With heroes outlawed, who can possibly stop her? Is the Queen about to meet an untimely end? This is it, the earth shattering conclusiong to Hero: 9 to 5 – Disposable Heroes!

Written by Ian Sharman and illustrated by David Gray with colours by Patrik Mock, click HERE to download Hero 9 to 5 #12: Disposable Heroes on DriveThruComics now!