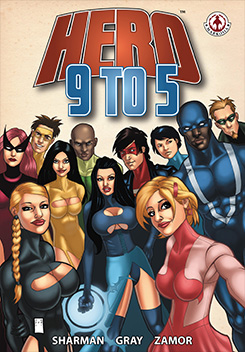 Welcome to a world where being a super hero is just another job.

A world where the rich can afford comprehensive hero protection policies that ensure that the best heroes will come to their aid in an emergency. The poor, however, have to make-do with protection from government sponsored agencies with limited resources whose staff are…shall we say…a little less heroic.

Jacob Reilly, aka Flame-O, is just one such hero, an everyday guy who just happens to be able to shoot flames from his hands. He didn’t want to be a super hero, he wanted to be a musician, but he wasn’t good enough to make a living at it. So he ended up getting a job at “Heroes For Zeros,” a government sponsored hero agency. So, Jacob clocks on, works nine to five and fights z-list villains for a pathetic pay cheque.

Despite being a super hero, Jacob has all the problems of regular folk – an irritating boss, bills to pay, professional jealousy, and also certain problems that are unique to his profession…like the fact that his girlfriend is also his alter-ego’s nemesis, Frostica (and she’s insanely jealous of his teenaged sidekick, Pink Girl).

Hero: 9 to 5 is a fresh, funny take on the idea of real world super heroes.